“My company just purchased the Sony A7 camera, I have used it recorded some vivid videos. The problem is I can’t get Sony A7 recordings to iMovie on Mac. I’ve set the video type to 1080 30p but still nothing. Any ideas on how to fix this?”

The Sony A7/A7R records and outputs video in the AVCHD format, which is mostly used by Sony and Panasonic cameras and camcorders. However many people do have problems in importing/editing them in iMovie. So how to solve and make your A7/A7R AVCHD/MTS file compatible with iMovie on Mac.

How to convert and import Sony A7/A7R files to iMovie on Mac?

Tip: You can add your Sony A7/A7R AVCHD/MTS video by drag-and-drop. And the software has a feature of previewing and playing your Sony A7/A7R video files. Simply select a file which you want to preview in the Source File area and click Play button, you can also take snapshot at will to store the image you like.

After you finish video source setup, you can select your preferred video format from the “Output Format” drop-down menu. Here we choose AIC MOV video, and click the output button to specify a directory on your computer to save the output files. 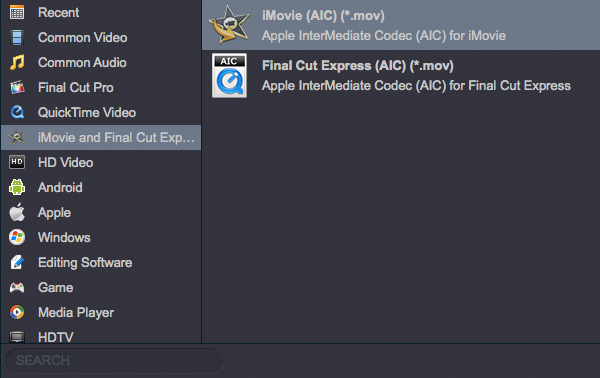 To start converting, click the Start button and the AVCHD converter starts transcoding Sony A7/A7R AVCHD/MTS to MOV for editing in iMovie.

After the conversion, it is easy to edit recorded videos in iMovie together with other videos and images. The Sony A7/A7R converter also supports the videos from other AVCHD cameras or camcorders like Sony RX10 for editing movies in iMovie.